MENUS
Featured Recipes: Steakhouse at Home
As featured on our Facebook Live event 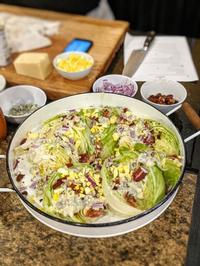 Last night Conquering Cuisine welcomed Scott from Round Guys Brewing Company in Lansdale for a new Facebook Live event.  The topic? Pairing Beer with your At Home Steakhouse Dinner.  The set-up? Conquering Cuisine offered a Steakhouse Meal Package to customers.  Customers were provided with ready to serve delicious sides (recipes below), ready to cook steaks and the ingredients for the sauce.  Then customers (and the rest of our Facebook community) joined us virtually to learn how to finish preparing the meal.   We also treated customers to a 4-pack of Round Guys beer and Scott discussed how the beers paired with components of the menu.  Our recent collaborations with local small businesses have not only provided us a deeper sense of community but have given us the opportunity to connect with customers in a whole new way.  Enjoy these traditional steakhouse offerings at home and be sure to stop by your local craft brewer for the perfect beer to accompany your meal.